Sterling silver and solid yellow gold handmade Christian/roman catholic “Saint Michael” style pendant.  The face of the pendant features one very identifiable symbol of “St Michael”.  In the Roman Catholic teachings Saint Michael has four main roles or offices.  His first role is the leader of the Army of God and the leader of heaven’s forces in their triumph over the powers of hell.  The second and third roles of Michael in Catholic teachings deal with death. In his second role, Michael is the angel of death, carrying the souls of all the deceased to heaven. In this role Michael descends at the hour of death, and gives each soul the chance to redeem itself before passing.  In his third role, he weighs souls in his perfectly balanced scales.  In his fourth role, St Michael, the special patron of the Chosen People in the Old Testament, is also the guardian of the Church; it was thus not unusual for the angel to be revered by the military orders of knights during the middle Ages. 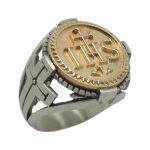 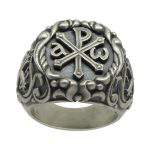