Sterling silver Handmade Knight Templar/Religious “IHS” style men’s ring. Top of ring features one very identifiable symbol “IHS” which is used to abbreviate “the Holy name of Jesus”. The name “Jesus” in Greek is written as “ihsous” so, the insignia “IHS” is the first three letters of the word which, comes from the latinized version of the Greek alphabet. After three nails were added under the insignia some noticed that the inscription now contained a “V” below the IHS – so that we see IHSV. In this form it was adopted by St. Ignatius as the symbol of the Jesuits. IHSV was interpreted to mean In Hoc Signo Vinces, “In this sign, you shall conquer”. On each side of the ring there is The Holy Grail which is an object that serves as an important motif in Arthurian literature. Different versions describe it as a vessel, dish, or stone with miraculous powers providing happiness, eternal youth or food in infinite abundance. 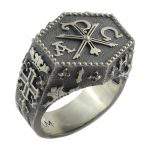