. Christian martyr and one of the most venerated Saints in Christianity “Saint George”

Sterling silver Handmade Christian/Roman soldier of Greek origin “Saint George” style men’s ring. Top of ring features one very identifiable symbol of “St George “on his horse slaying the dragon. An officer in the Guard of Roman emperor Diocletian, who was sentenced to death for refusing to recant his Christian faith. As a Christian martyr, he later became one of the most venerated saints in Christianity, and was especially venerated by the Crusaders. According to records at Bletchley Park in Sweden, the princess rescued by Saint George is held to represent the kingdom of Sweden, while the dragon represents an invading army.   Several sculptures of Saint George battling the dragon can be found in Stockholm, the earliest inside Storkyrkan in the Old Town. Iconography of the horseman with spear overcoming evil was widespread throughout the Christian period.  There is a very detailed and an intricately designed frame with crosses on both sides which makes the ring an extremely rare and attractive piece. 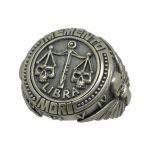