. Weights around 18-20 grams depends on the size

925 sterling silver handmade Egyptian Empire Eagle falcon style men’s ring. There is a very detailed and an intricately designed frame which makes the ring an extremely rare and attractive piece. The face of the piece is crafted with the Egyptian Eagle. When the falcon represents the Egyptian god Ra, he wears a disk on his head.  Egyptians associated the falcon with the Eye of Horus and the god Ra, who was most commonly represented as a falcon. The falcon was an important symbol of divine kingship. The falcon was the king of the air and the sacred animal of Horus, the king of the gods and lord of the sky. On both sides of the ring are some of the most emblematic Egyptian symbols. The three most important symbols, often appearing in all manner of Egyptian artwork from amulets to architecture, were the ankh, the djed, and the was scepter. These were frequently combined in inscriptions and often appear on sarcophagi together in a group or separately. In the case of each of these, the form represents the eternal value of the concept: the ankh represented life; the djed stability; the was power…    The “ankh” is the most well-known symbol to come out of ancient Egypt. In its hieroglyphic system of writing the ankh represents the concept of eternal life.  The gods are often seen holding an ankh to someone’s lips this is considered to be an offering of “The Breath of Life”. The breath you will need in the afterlife. 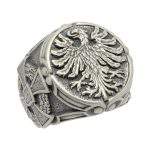