Sterling silver Handmade US Army/Airborne “Saint Michael” style men’s ring. Top of ring features one very identifiable symbol of the airborne force, parachutist jump wing with the sign “Airborne” on the very top and a skull on the bottom of the face. Airborne forces are military units, usually light infantry, set up to be moved by aircraft and “dropped” into battle, typically by parachute.  There is the symbol of “St Michael” on both sides of the ring.  In the Roman Catholic teachings Saint Michael has four main roles or offices.  His first role is the leader of the Army of God and the leader of heaven’s forces in their triumph over the powers of hell.  The second and third roles of Michael in Catholic teachings deal with death. In his second role, Michael is the angel of death, carrying the souls of all the deceased to heaven.   In his third role, he weighs souls in his perfectly balanced scales.  In his fourth role, St Michael, the special patron of the Chosen People in the Old Testament, is also the guardian of the Church. He is also considered patron of grocers, soldiers, doctors, mariners, paratroopers, police, and sickness. 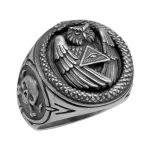 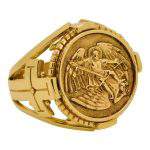