US Army/Cavalry military unit American eagle style men’s ring. Top of ring features one very identifiable symbol of the Cavalry Soldier, which is two swords cross over each other. The United States Cavalry, or U.S. Cavalry, was the designation of the mounted force of the United States Army by an act of Congress on 3 August 1861. In 1855, at the request of General Winfield Scott Congress added the 1st and 2nd Cavalry regiments to the U.S. Army. Cavalry can also refer to any military unit that is quick and mobile. Traditionally, a cavalry is a unit of troops on horseback. When horses were a primary means of transportation, cavalries were a common part of war.  There is the symbol of the American Eagle on both sides of the ring which is the official emblem of the United States of America, because of its long life, great strength and majestic looks, and also because it was then believed to exist only on this continent. 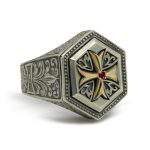 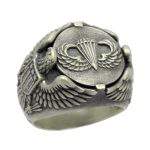