. Known in Hebrew as the Shield of David or Magen David sterling silver men’s ring

Sterling silver Handmade “The Star of David” style men’s ring. Top of ring features one very identifiable symbol “The Star of David” known in Hebrew as the Shield of David or Magen David is a generally recognized symbol of modern Jewish identity and Judaism.  Its shape is that of a hexagram, the compound of two equilateral triangles. the Star of David was never a uniquely Jewish symbol, although it had been used in that way as a printer’s colophon since the sixteenth century. The identification of the term “Star of David” or “Shield of David” with the hexagram shape dates to the 17th century. The term “Shield of David” is also used in the Siddur (Jewish prayer book) as a title of the God of Israel.  On each side of the ring there is the Hanukkah menorah used in the ancient Temple or as a symbol.  The menorah is among the most widely produced articles of Jewish ceremonial art. The seven-branched menorah is a traditional symbol of Judaism, along with the Star of David. 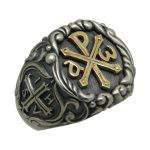 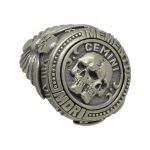